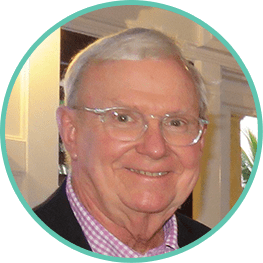 Born in Alexandria, Virginia, Pat Walsh received his undergraduate degree in sociology from William and Mary and his Masters in Finance from George Washington University. He worked at Merrill Lynch for 32 years, with his last position being SVP of Global Human Resources. He and his wife are at Orchid Island from early January until late June. The rest of the year, they live in the Princeton, New Jersey area, near their children and 11 grandkids. They are members of: Quail Valley, The Ridge at Backbrook and Cherry Valley CC. At Orchid, Walsh enjoys playing golf (19 handicap), working out at the Fitness Center and walking on the beach. He participates in the Book Club and Finance Club. He loves the people at Orchid—both the members and staff and thinks it’s very well managed. He also really likes Vero Beach.

Donna Thrailkill’s hometown for the last 28 years is Huntsville, Alabama. She was born in Prescott, Arizona, and grew up in suburban Philadelphia where she attended high school, college and worked for a number of years. She has also lived and worked in Boston, Boca Raton, Florida, Atlanta, Georgia, and Lake Oswego, Oregon. Upon moving to Huntsville, Donna began her second career as a volunteer for the Huntsville community and served on various boards.

Donna and her husband, Howard, spend approximately nine months each year at their Orchid Island home in addition to visiting Atlanta, Boston and Paris where their children and family members reside. At Orchid, Donna is a member of the Literary Society of Indian River County, the Orchid Garden Club, and Orchid Outreach. Donna currently chairs the House Committee’s Holiday Decorations Committee. Donna enjoys the social aspects of golf and participating in non-competitive golf at Orchid as well as enjoying the spa and the many dining venues at the Club. Most of all, she enjoys the incredible environment here at Orchid. The members, management and staff all combine to create this one-of-a-kind community.

Henry Thomas spends his time in Baltimore and Maine when not at Orchid Island. He is an insurance professional and attended Boston College. Other club affiliations include Elkridge (MD); Farmington (VA); Boothbay Harbor (ME). While at Orchid Island, Henry can be found utilizing the Fitness Center, spending time at the beach or playing a round of golf (10.7 handicap). He also enjoys boating on his Grady White. Two of his favorite things about Orchid Island are the people and the golf course.

Leslie Prothro, from New Hampshire, grew up in Bedford. Leslie, a Mental Health Counselor, attended Wake Forest University and The University of Texas at Austin. She is affiliated with Manchester and Abenaki Country Clubs (NH) and Quail Valley (VB). From November to May, you can find Leslie enjoying the Fitness Center, spending time at the beach, playing a round of golf (22 handicap) or participating in events such as Trivia Night and Friday nights at the Turtle Bar. Leslie loves the community of positive and engaging people at Orchid Island.

Chris Kirchen grew up in Memphis, Tennessee, but spent most of his adult life in Darien and Greenwich, Connecticut where he and his wife raised their children. They generally spend November through mid-June at Orchid Island, and much of the rest of their time at their home in Warren, Vermont. Kirchen received his undergraduate degree from Sewanee: The University of the South and his MBA from Wharton. He began his career in marketing and consulting, and then moved into Venture capital. In Connecticut, the couple belongs to Woodway Country Club. At Orchid Island, Kirchen enjoys hiking, biking, the Orchid Book Club and golf (22 handicap). The Kirchens live in the condos and enjoy walking to the beach, working out at the Fitness Center and dining at Orchid’s restaurants. Kirchen’s favorite parts of life here are his fellow club members and the friendly staff. He also enjoys the attractive setting and the town of Vero Beach itself.

Colette Kennedy, a year-round resident of Orchid Island, grew up in New York and attended Skidmore College. She was transferred to Chicago for work where she met her husband and spent most of her married life in Winnetka, Illinois. Colette travels during the summer months to Europe and California where her children live. During her time in Winnetka, she and her husband were members of Westmoreland Country Club in Wilmette, Illinois. An avid tennis player, Colette is a member of the Tennis Committee and participates in the many tennis activities offered at the club. Colette’s other hobbies include book club, bicycle riding (Townie level), walking, and decorating. She can also be found enjoying the many events, parties and special dinners. “I think Chef Sozio provides wonderful inventive cuisine.” She enjoys the sense of community at Orchid Island.

Georgie Hutton grew up Brookline, Massachusetts and received her BA from Boston University and MA from Hood College. Her diverse career included owning a retail store and working in executive search. She spends nine to ten months each year at Orchid Island. The remainder of the year she is in Santa Fe, New Mexico where she is a member of The Club at Las Campanas. At Orchid Island, Georgie works out at the Fitness Center, plays pickleball and golf (13 to 14 handicap). She participates in the Orchid Island Bridge Group. Additionally, Georgie enjoys fishing and exploring the Indian River Lagoon in the Grady White 21.5 motorboat that she co-owns. She especially enjoys the intimacy and friendliness of the Orchid Island members and staff.

When not at Orchid Island, Bob Hausen lives in New York City and Watermill New York. He has membership affiliations with Laurel Links Country Club and Watermill Beach Club. Bob enjoys all of the activities offered at Orchid Island including golf (13 handicap) and tennis. He attended the University of Wisconsin for undergraduate studies and graduated from St. John’s University Law School.

Mary Grandy’s hometown is Somers/Bedford in Westchester County, New York, where she belongs to the Bedford Golf & Tennis Club. She spends November through May in Orchid Island. Mary attended Elizabeth Seton College. She stays very active at Orchid Island, participating in the Orchid Island Garden Club and Orchid Island Book Club, while also enjoying golf, walking and reading. Area organizations she is a member of include the Friends of the Riverside Theater, the Yale Club of the Treasure Coast and the Junior League of Indian River County. At Orchid Island, she enjoys dining at the restaurants, playing golf and working out at the Fitness Center. She loves Orchid Island’s beauty and amenities, but the camaraderie and longevity of the membership is what she treasures most.

Ann Costello is originally from Oklahoma City, and she and her husband, John, lived in the Washington D.C. area for more than 40 years. Today, they call Orchid Island home, living here from early October until May, while spending summers in the Adirondack Mountains in upstate New York. Ann is a graduate of Duke University. She is a lawyer and was a lobbyist on financial services issues. The couple belongs to the Chevy Chase Club, and she is a member of Sulgrave Club. Ann stays busy at Orchid Island serving on the Marketing Committee, as Co-Head of the Book Club and as a member of the Yacht Club. She works out with a trainer at the Fitness Center, enjoys massages at the spa, dining in Orchid’s restaurants, going to the beach and summer outings on the pontoon boat. Best of all, she loves the people at Orchid Island and all the close friends they have made.